As the 30th anniversary of Black History Month comes to an end, Islamophobia Awareness month begins. It’s a month that should remind us of the continuous struggles Muslims go through on a daily basis. As a black muslim both months are significant to me, they remind me of the barriers I face, one due to the colour of my skin, and the other due to the god that I worship. Nevertheless, this month shouldn’t be marked by simply highlighting the levels of Islamophobia in our society, but by looking at how governmental policies have fueled the shocking levels, and putting forward objective solutions to eradicate Islamophobia from our society.

It was revealed at the beginning of October that hate crimes on UK mosques had doubled in 2017 compared to 2016, going up from 47 to 110 incidents. With the largest increase in Islamophobic hate crimes taking place in Greater Manchester and London, both indicating the spike in hate crimes following terrorist attacks. 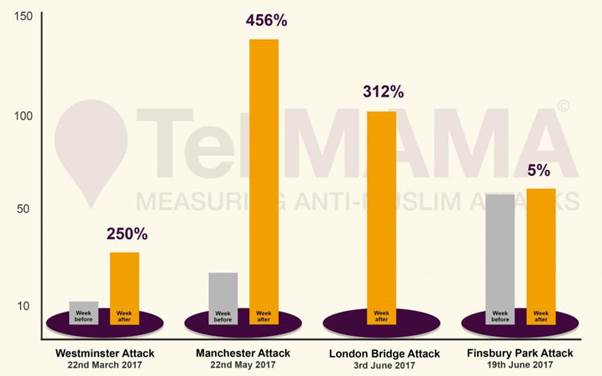 Islamophobia isn’t unique to one part of society, indeed political parties must not be afraid to call it out within their own structures. Zac Goldsmith’s disgusting and islamophobic Mayoral campaign in 2016 is a prime testimony, linking Sadiq Khan’s muslim background to the 7/7 bombings. In another example just over a week ago, Bob Blackman, MP for Harrow East hosted and chaired an event in Parliament with a prominent anti-Islam campaigner linked to the English Defence League, Tapan Ghosh, who recently said “Backwardness is the most powerful ‘weapon’ of Islam. Rohingyas are glaring example.”  And even within the Labour Party, I personally have witnessed first-hand, the subtle Islamophobia conveyed by some people towards Muslims.

So what is the answer to the fight against Islamophobia, Integration?

Integration has too often been a stick used to beat Muslims with, and the reality is that it does improve community cohesion, however it’s important to call out the incredibly flawed notion that somehow integration leads to less Islamophobia, when the fact is, racists and Islamophobes will remain racists and Islamophobes, no matter how integrated muslims are. A prime example of this is the horrendous abuse directed at high profile muslims like Nadiya Hussien and Sadiq Khan, despite being seen as liberal, mainstream and integrated muslims.

We’ve made progress over the last 5 years, police forces across the country now register attacks on muslims as Islamophobic attacks rather than common assault or abuse. But that’s not good enough, the aim of this month should be;

1- Pushing Universities to have robust policies on our campuses making it absolutely clear the consequences Islamophobia and all forms of hatred have.

3- Pushing for newspapers to publish their apologies in the same font, size and page in which they published prior allegations, for example the Sun’s outrageous headline ‘1 in 5 British Muslims had ‘sympathy for jihadis’

4- Influencing school curriculums and tackling hate at a young age.

Trans Officer Update, by the National Office    We are delighted to announce that Labour Students will have Trans Officer in this academic year, provided it passes at National Conference 2019. Liberation Conference falling before Read more…

As we conclude Pride month, our LGBT+ Officer Antony Riley writes about its importance in 2018.   For some in 2018, it is easy to forget where Pride has its origins amongst the pink-washing, amongst Read more…

What YOU can do this World Refugee Day

Labour Students BAME Officer Rania Ramli writes about our recent World Refugee event co-hosted with the Jewish Labour Movement, and what we all can do to support refugees across the world.   Yesterday the Labour Read more…

Get access to campaign resources, invites to national events and the chance to be part of the biggest student movement in the country.